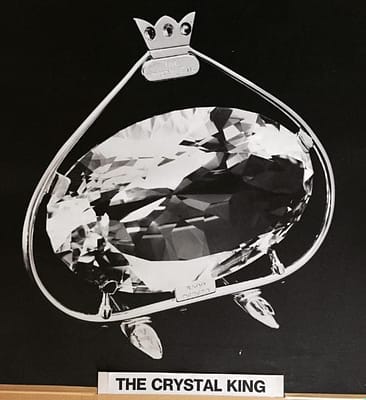 For two years I searched for a crystal large enough and clear enough from which I could facet a very large stone.

Friends who travelled to overseas countries were asked to be on the lookout for me.  One of these friends sent back a Brazilian Crystal, but unfortunately, it was only large enough to cut 1000 carats, and I had already cut a stone of this size,  1086 carats, from a piece of crystal I had obtained here.

More than twelve months later, a friend asked me to help him with some faceting problems and brought round a large piece of clear rock crystal.  When I asked him where he got it, he told me he was an acquaintance of Mr John Willey, the man who had dug the Crystal King Mine at Tallangalook, Victoria, during the war for radio crystal, and that Mr Willey had an even larger crystal at him home in Caulfield.

Having rung Mr Willey to obtain his permission, I went over and searched through his heaps of crystal, finding one weighing 32 lbs and measuring 10” base to peak and 8” across flats.  I immediately made a deal for the crystal, took it home, polished a couple of flats on the Vibro lap so I could see into it.  It had a fracture right down the length of the crystal about the middle.

After some calculations, I realised I would need a 14” lap for cutting the stone.

To make the machine took three weeks and the lap absorbed 4 carats of diamond dust per side – 80-100 micron on one side and 8-15 micron on the other.

In between time I had trimmed the block roughly to shape.  Next came the grinding of the preform.  I fitted a 10” x 2” x 80 grit silicon carbide wheel to my grinder, plus extra water feeds, as no heat could be tolerated in the grinding process.  After a week of careful grinding, I had my preform, 4-1/2 lbs of it and a completely worn out wheel.  The stone now measured 7-5/8” x 4-5/8” x 3-1/4”.

Then how to dop the stone for faceting.  Finally, I decided on strips of wood fixed to special dops I had made, the dops one side, the stone the other, all cemented together with Araldite.  This would allow me to split the wood to remove the stone after faceting.  I could not use wax because using any heat would be too dangerous on a piece of crystal this size.

Well, I did the cutting, 196 facets of it, removing more than 1400 carats of the material in the process and using 1-1/2 lbs of tin oxide for polishing.

One of the problems of cutting an oval brilliant is that there is only ½ of a tooth on a 64 cog between 12 of the facets on each side.  This meant very accurate work and many alterations of dop settings in the holder.  In addition, cutting oval means every set of 4 facets (mains, girdles and stars) must have separate settings.  Many times I cursed that fracture which forced me to cut oval instead of round.  Well, 3-1/2 months later and 276 hours of cutting and polishing, the job was finished.

I have named it the “Crystal King”, after the mine which yielded the crystal from which it was cut.

Ed. This article was written by the late Alex Amess in 1971. At that time, this was the worlds largest faceted stone ever cut. Alex, on all counts, was an extremely talented facetor, and most likely one of the kind.

Learn more about Alex’s unique gift of faceting, along with his ‘Held in Fingers’ technique of cutting, by following this button.

Alex’s story below was published to the lapidary world way back in 1993, and until today, Alex’s remarkable ability to hand-cut faceted stones remains something very unique to him. In …
Read More

My Story, by Laurie Hall – Early in September, I received an email with a scanned image of an article from the April issue of the Thumblicker newsletter. The article …
Read More