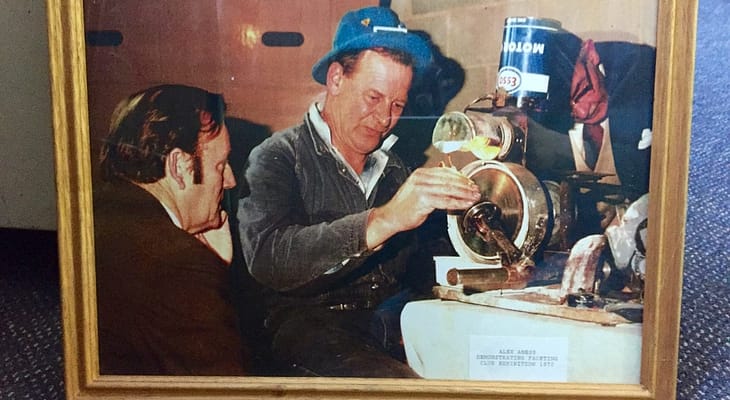 Alex’s story below was published to the lapidary world way back in 1993, and until today, Alex’s remarkable ability to hand-cut faceted stones remains something very unique to him. In fact, watching Alex faceting was my first introduction to faceting, I was 12 years old at the time!

The Victorian Branch (Now the VFG) displayed the Alex Amess collection at the National Gem & Mineral Show held as part of the Ballarat GEMBOREE during Easter (1994).

The collection was borrowed from the Victorian Museum, and it was on display for the first time on over 20 years.

This article is aimed at giving facetors an idea of the unique skills which Alex Amess had.

Alex Amess was trained as a turner-fitter-die maker. He had an amazing ability to judge the thickness of steel plates and to judge angles because of his training. In his teens, he was producing flat plates for precision engineering, equal to the best in the world.

In 1966, his mother, while living in Perth with Alex’ brother Ron, became interested in cutting and polishing cabochons at the West Australian Lapidary Club.

Ron was transferred to Brisbane in 1967, and on the way from Perth, stopping in Melbourne to visit the family.

Mother showed Alex her cabochons and gave Alex some slabs of rock which he cabbed on his engineering workshop equipment.

On regular visits to Melbourne from Brisbane, mother gave Alex quartz crystal collected at Kingsgate in NSW. Alex had read a book about natives in Sri Lanka sitting in the street faceting by holding the stone in their fingers. Alex said that if they could do it, so could he.

Alex cut all his early stones on cabochon sanding and polishing equipment, that is why the early stones had rounded facets.

Alex visited many Clubs demonstrating his “held in the fingers” faceting and often cut a stone on the Club’s cabochon discs, and the Club then auctioned it on the night. He was cutting a 15-20mm Standard Round Brilliant in 20-25 minutes. That’s right – 20-25 minutes, starting from a rough preform and talking all the while to the audience – stone held in fingers – a quick look – turn it a bit more – back to the lap – and so on.  Incredible to watch!

(The article below was published in the local paper  at the time of the GEMBOREE®.)

Alex made a faceting machine using a 1/4 h.p. motor, a quart oil can for water supply, and some bits and pieces from his workshop. He turned up a lap from a piece of mild-steel plate which he used for all his faceting. The lap was mounted vertically, like a sanding disc on a cabbing machine. No index wheel though – that was replaced by his eyes and a steady hand.

He started entering faceted stones in competitions, both here and in the USA – and he was a regular winner.

Of interest, Alex achieved scores up to 95 from Ted Koller, who was the doyen of Judges in those days. A 95 score from Ted Koller was virtually unheard of – he was a very demanding and tough Judge.

Dr Beazley, then Curator of Minerals at the Melbourne Museum, saw Alex demonstrating his technique, and visited him regularly at home to watch him cutting stones for the Museum’s collection. Dr Beazley found it hard to believe the accuracy Alex could achieve.

In 1969 Ron and Mrs Amess bought back 6lbs of topaz from Mt Surprise collected on their around Australia trip, and Alex started cutting topaz.

On one occasion, when cutting an emerald cut in man-made ruby, Alex burnt the nerves in the tips of his fingers and lost the feeling in them. He was unable to facet for six weeks until the feeling returned to his fingers – hence the reason he restricted his faceting to the softer materials – quartz and topaz mainly.

Alex Amess cut stones from 1/2 carat to 1000 carats and was searching the world for a large crystal of quartz to facet a REALLY BIG STONE. He eventually found a piece – virtually in his own back yard!

FOOTNOTE: In January 1973, Alex was holidaying with his wife and daughter and friends at Harrietville when he died of a heart attack while fishing in the Ovens River – age 50 years.

See Alex’s account of cutting THE CRYSTAL KING by following the link.

My Story, by Laurie Hall – Early in September, I received an email with a scanned image of an article from the April issue of the Thumblicker newsletter. The article …
Read More

“The Crystal King” The world’s largest Brilliant Faceted Gem? For two years I searched for a crystal large enough and clear enough from which I could facet a very large …
Read More